First to Fight Foundation (FTFF) is a charitable organization founded by combat veterans Eric Cook and Jeff Mattia. FTFF gives support to military veterans and their families by providing guidance with the transition from active duty, a connection to other veterans, and resources to maintain a successful civilian life. The foundation provides referrals, guidance, and mentors for veterans who need assistance navigating the V.A. systems, learning about benefits and services, medical care, rehabilitation, counseling, housing, job training, financial assistance, and more by reconnecting each other with a sense of camaraderie.

Both Eric and Jeff are successful, award-winning chefs and each owns his own restaurant. Although they are very busy in their careers, they wanted to give back to veterans in their communities. Nearly 30 years ago, both Eric and Jeff were on the battlefield as Marines. Both say their military training and careers prepared them to be successful as chefs. Jeff Mattia notes, “It’s one thing to be a great chef, but if your own restaurant is going to be successful, you’ve got to run your kitchen like a military operation – and lead the team into daily battle.”

Cook worked in a special operations unit during the Gulf War, and often embarked on both dangerous and highly secretive missions. “We were front runner guys … we’d come in, blow things up, and get out,” he recalled. Surprisingly, it’s after Cook left the military and arrived back in the American suburbs, that he began to feel vulnerable. Cook states, “Your armor and your weapon no longer protect you. You can’t just take over things anymore,” he said. “You become one of the sheep in the herd.”

While serving in the military, Cook had grown accustomed to rigid daily routines that involved carting around a rifle and 200 pounds of ammunition. He was always on the move with his fellow Marines. Once he became a civilian, however, that lifestyle disappeared. “I wake up one day and go, ‘What happened?’ I was this very powerful, physical, warrior guy, and all of the sudden, I’m applying to be a cashier at Walmart,” said Cook. “It’s depressing, because you come from this elite fighting force where you feared nothing; no entity is greater than you. Then you come back into the world, and there’s no glory. And it’s difficult.”

The U.S. Department of Veteran Affairs (the VA) defines post-traumatic stress disorder (PTSD) as a mental health problem that some veterans develop after experiencing combat. Cook believes that PTSD partially stems from the trauma of losing the camaraderie that’s shared by members of the military. Because people with PTSD are afflicted with painful memories, they may feel on edge or have trouble sleeping. About 12-percent of Gulf War veterans have PTSD in a given year, according to the VA. Between 11- and 20-percent of veterans who served in Operations Iraqi Freedom and Enduring Freedom experience PTSD.

According to the National Council for Behavioral Health, 30-percent of active duty and reserve military personnel deployed in Iraq and Afghanistan have a mental health condition requiring treatment. However, less than 50-percent of returning veterans receive any treatment. The V.A. reports that approximately 22 veterans die by suicide every day. Some veterans transitioning into civilian life are unable to find helpful programs or to meet folks who have experienced similar struggles – or triumphs, for that matter.

In 2016, Cook launched the First to Fight Foundation, a nonprofit organization that assists military veterans and their families. The Foundation, which Cook runs with his wife, Robyn, and his sisters, connects veterans to one another, and to the resources that will help them maintain a successful civilian life. First to Fight provides veterans with financial relief; assistance in navigating VA benefits and services; and team activities, such as fundraisers, which allow them to recreate the sense of camaraderie they experienced while in the military.

Over the years, the Cooks have met veterans who were able to successfully navigate the VA processes and get help. Through their First to Fight Foundation, they put those veterans in touch with another. “We started forming relationships, where we’re like, ‘Oh, you want to buy a house? I know a guy who did that, so let’s get advice from him on how to work the VA program,’ basically,” said Robyn.

Aside from being the president of the First to Fight Foundation, Cook is a member of the Veterans of Foreign Wars, and an active volunteer for such organizations as Wounded Warriors, The Legacy Foundation, Disposable Heroes Project, We Heart Veterans, and The American Red Cross. In a sense, for Cook, bustling through the kitchen mimicked Marine life. “It’s very much like building a military rifle squad,” said Cook. “Everyone has their job to do, but we have the same objective.”

Cook’s culinary career has led him through some of the finest local restaurants, including Brennan’s, Commander’s Palace, and Dickie Brennan’s Bourbon House. The chef has made appearances on national cooking shows, and he has helped devise meals for the U.S. Marine Corps Ball and U.S. Navy Ball. He also prepared a special dinner for President George W. Bush, the president of Mexico, and the prime minister of Canada.

“We’re still logistically controlled by my wife and my sisters, who tell us where to go, when to be there, and how to do it,” said Cook, only half-joking. First to Fight raises money through various fundraising events, such as the Steel Beach Picnic, and participates in philanthropic festivals. A few years ago, they established “Born to Grill” – a barbecue team that participates in Hogs for the Cause, the annual springtime extravaganza that raises money to benefit families battling pediatric brain cancer. Each year, Born to Grill – Whole Hog champions – build a massive and elaborate compound on the festival grounds, where they serve beer, barbecue delights, and create good vibes. “Our team started as four people and now, we’re up to almost 60 people,” said Cook, explaining how each person has a job – whether it be constructing the booth, handling money, or cooking. “We all come together for a common cause, and almost become military again.”

Cook acknowledged that moving from the “military world to the civilian world” takes a while. “You have to be patient. You have to understand that there are people out there willing to help you get to where you want to be, but you have to take care of yourself first,” he said. “Find something you’re passionate about. Find people who are passionate about it with you, and start a new tribe.”

If you or someone you know is a veteran and needs help, a form is available on the FTFF website here:
https://firsttofight.org/contact-us 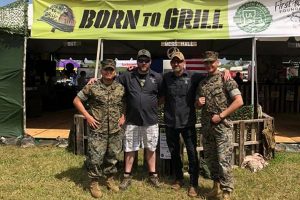 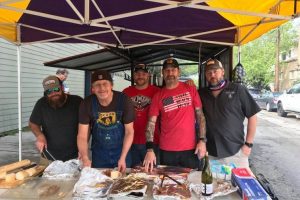 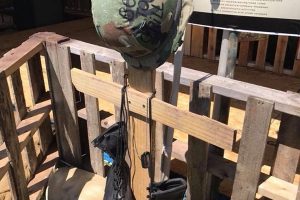 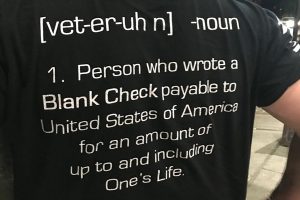