Change doesn’t come all at once, but with unwavering determination, change happens.

Brightening the once banal streets of downtown Baton Rouge, the first mural of the Walls Project shone like a beacon for newly returned artist, Helena Williams. Since moving back from the west coast, Helena, then twenty-four, was settling back into her hometown. Despite returning, she wanted to see more from her city than what she experienced growing up,

“I felt that Baton Rouge had so much potential, and it took me seeing other cities embrace its diversity and creativity so well to know we could absolutely do it here too.”

The Walls Project’s first mural inspired Helena to act, signing up for the first opportunity to participate in their volunteer mural event. Helping paint a large fence at BREC’s Gayosa Street Park allowed her to experience, first-hand, the volunteer rush of helping out for a greater cause. From there Helena went on to help the nonprofit wherever a need presented itself, mainly using her creativity and skills to be the organization’s main graphic designer.

After years of seeing Walls grow, not only by adding programs, but growing deeper in its mission, Helena knew this nonprofit’s ripple effect was invaluable, and she wanted to be a part of it. In 2017, Helena seized the opportunity to join the Walls Project staff full time.

MLK Festival of Service, shortened to MLK Fest, is Walls Project’s four-day community service event. Started on MLK Day in 2014 as a one-day painting project grew into an event seeing thousands of volunteers from all over the parish during the course of MLK weekend. Working with over 200 partners, including the City of Baton Rouge, Walls Project manages the coordination and implementation of the projects focused on revitalizing old buildings and cleaning trash and debris from streets.

As the organization’s influence and creative reputation grew, bringing in first 1500 volunteers in 2018 and then 2500 volunteers in 2019, the Walls team designed a strategic plan behind catalyzing the numbers of volunteers and partner organizations to one location. Following the Plank Road Master Plan put forth by Build Baton Rouge, the Walls team brought to life a new program: Reactivate. This program’s mission was to bring the action of MLK Fest to a yearlong endeavor – reactivating neighborhoods in need.

Setting sights on Plank Road, and having a vision at the helm, Helena worked to plan three Quarterly Cleanups along Plank Road and major artery streets, like Winbourne Avenue. By returning to past locations and systematically going along Plank, the clean up efforts saw consistent work accomplished, and most importantly, set a precedent to the community that the work is never done.

For MLK Fest 2020, Walls focused on an area of Plank Road sandwiched in between two major streets, Choctaw and Winbourne Avenue. With the help of 3500 volunteers, Helena and her team painted 8 buildings, cleared 3 large vacant lots, and cleared a total of 50 tons of trash and debris from neighborhood streets along Plank Road.

The effect these cleanups have on the community are not just in the number of sites, or how many building owners are served, but in the thousands of volunteers who have the opportunity to participate in something bigger than themselves, and to help a city that faces many struggles. As the work continued, it became clear to Helena that the people of Baton Rouge want to see their city flourish, and they are increasingly willing to take charge and make change.

“What I look forward to the most in our cleanup events is not just the work getting done, but seeing the relationships form between strangers. We really start to see a community grow closer together.”

A decade after returning home, Helena is finally seeing the needle move. While the work never seems to stop, the end result is a city propelling forward. As a creative, she is excited to see a vibrant city, and as an activist, she is thrilled to see everyone having a seat at the table. 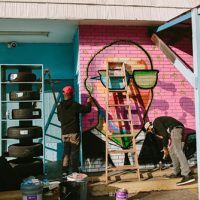 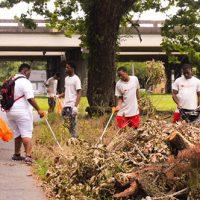 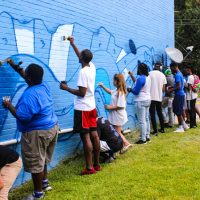