Sandy Franks was born and raised in St. Petersburg, Florida.  She served 23 years in the United States Air Force and retired in 1997 at the rank of Senior Master Sergeant.  She was a licensed practical nurse when she entered the Air Force, was later trained as an EMT and Paramedic and spent many years working in the Emergency Room at Eglin Air Force Base, Florida.  She served in the First Sergeant career field for 7 years and was the first woman in the Air Force to be First Sergeant of an Air Rescue and Recovery Squadron.  She also served as First Sergeant, 501st Tactical Missile Maintenance Squadron, Greenham Common Air Base, England and the 377th Security Police Squadron, Ramstein Air Base, Germany.  She was assigned to Barksdale AFB in 1993 and worked at the 2nd medical group.  She completed her career as the Chief of Protocol for the former 2nd Bomb Wing Commander, Brigadier General Dave Young.

Her decorations include the Meritorious Service Medal (5 awards), the Humanitarian Service Medal, AF Outstanding Unit Award (3 awards), and the AF Organizational Excellence Award. She is the recipient of numerous military recognitions to include Airman, NCO, Senior NCO and First Sergeant of the Year and was promoted under the Stripes for Exceptional Performers program.

After retirement Sandy worked in marketing and public relations in the private sector.  She was also the Chief Executive Officer for the local Girl Scout Council and the Public Affairs Officer at Overton Brooks VA Medical Center from 2007 until 2014.

She is especially dedicated to programs for Veterans, women and children.  She is the founder and President of the Women Veterans of the Ark La Tex, a non-profit organization which supports and assists women Veterans in the community.

She is proud of her service and proud to be a Veteran. 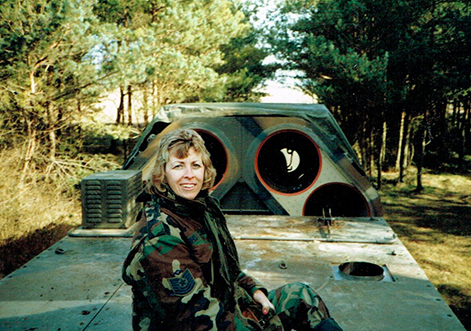