Raeanna Blanchard Doescher is the founder and creator of WhiteBlancCanvas. Her passion for painting came later in life and it started as a way to cope with and overcome the stresses of life. It became so therapeutic that she started painting every night. Before she knew it, the paintings started piling up in what she calls her paint room. It was around that time that she decided to put her work out there for the public to see. Raeanna says that was the best decision of her life!

The audience she reaches has always been very kind and encouraging regarding her work. Now that she has built a small audience, she likes to utilize them as a means to help others, or “pay it forward”, so-to-speak. “Stella’s Angel Wings” is a painting that evolved out of a terrible tragedy for one of her close friends and has grown into a statement piece that has touched many hearts. Stella Lauren, whom this piece is named after, gained her angel wings at just 4 months old. The 4×4 gold angel wings fundraisers have raised much needed funds that are donated to families in need when grieving the loss of a baby, including Kristen, Stella’s mother.

The main focus of creating new styles of paintings has been, “How will my audience respond to this piece?” The audience and/or customers are her motivation everyday. As Raeanna says, “If it were not for them, I would not be where I am today.” They have helped so many families through some seriously tough times. Some of her most successful fundraisers include: Hurricane Harvey, Phil Lungsford (cancer fighter/survivor), Stella Angel Wings, Hunter Cartwright (lost his wife to AFE after delivering their baby boy) and Jessica Martin (breast cancer). “I have learned that people do not bat an eye when it comes to donating, and I do what I do because of them. In a world that is filled with so much grief it’s nice to see that there is still so much LOVE!” 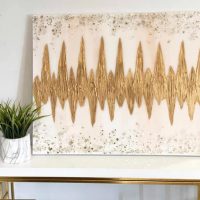 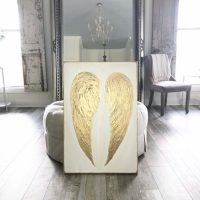 Evenings at the Mansion Ladies of Louisiana – Military (March 2019)