The Roux
Heat 1 ½  cups canola oil on medium high heat in a cast iron skillet. With a wooden spoon stir in 1 1/2 cups of the flour continue to stir for 15 to 20 minutes. Make sure to continue to stir the roux so it does not burn. Once the roux gets to be a deep dark brown color add the remaining 1/2 cup of flour. Take off the heat.  Place roux in a metal bowl so it does not burn in cast iron skillet and set aside.

The Gumbo:
In a large cast iron pot sauté onions, garlic, celery, bell pepper, and okra in butter. Cook for 15 to 20 minutes until okra is falling apart and completely cooked down. Add 1 Tablespoon Creole seasoning mix and stir in. Then add dark roux. Stir in with wooden spoon until well incorporated, then slowly add hot chicken stock while mixing. Once all the stock is in the Gumbo add 3 ham hocks, Worcestershire, Hot sauce, bay leaves, file, cayenne, and remaining Creole seasoning and cook on medium/low heat for 45 minutes. Add the smoked chicken and smoked Andouille and cook for an additional 15 minutes on a low simmer. Taste and season with salt. Skim fat and oil off the top then serve over Louisiana long grain rice and garnish with green onions.

Justin Ferguson is a Baton Rouge native and Army veteran who completed two tours in Iraq before enrolling in a culinary arts program at the  Louisiana Culinary Institute (LCI) in 2005. After graduating from LCI, Ferguson moved to Boston and worked as a line cook at both Tresca and Via Matta. He later returned to Baton Rouge, for the opening of Stroubes Chophouse where he was the Executive Chef.

In 2010, Ferguson was approached by Superior Restaurant Group with an offer to assist with opening Superior Seafood in New Orleans, in the role of Executive Chef. Ferguson later moved on to the Roosevelt Hotel a Waldorf Astoria Property in New Orleans, where he was the Chef de Cuisine of the Hotel, Teddy’s Café, Sazerac Bar, and the Fountain Lounge.

Ferguson most recently worked in Chicago as the Corporate Executive Chef at Ideology Entertainment, where he assisted in opening four concepts and directed the culinary teams at five restaurants. He had the pleasure of working alongside celebrity chef, Art Smith in the development of Blue Door Kitchen and Garden and also worked with Pitmaster, Lee Ann Whippen during her time at Chicago.

He has since returned to Baton Rouge and in June 2017 opened BRQ, which is a Southern Seafood and Barbecue restaurant that is currently receiving rave reviews. 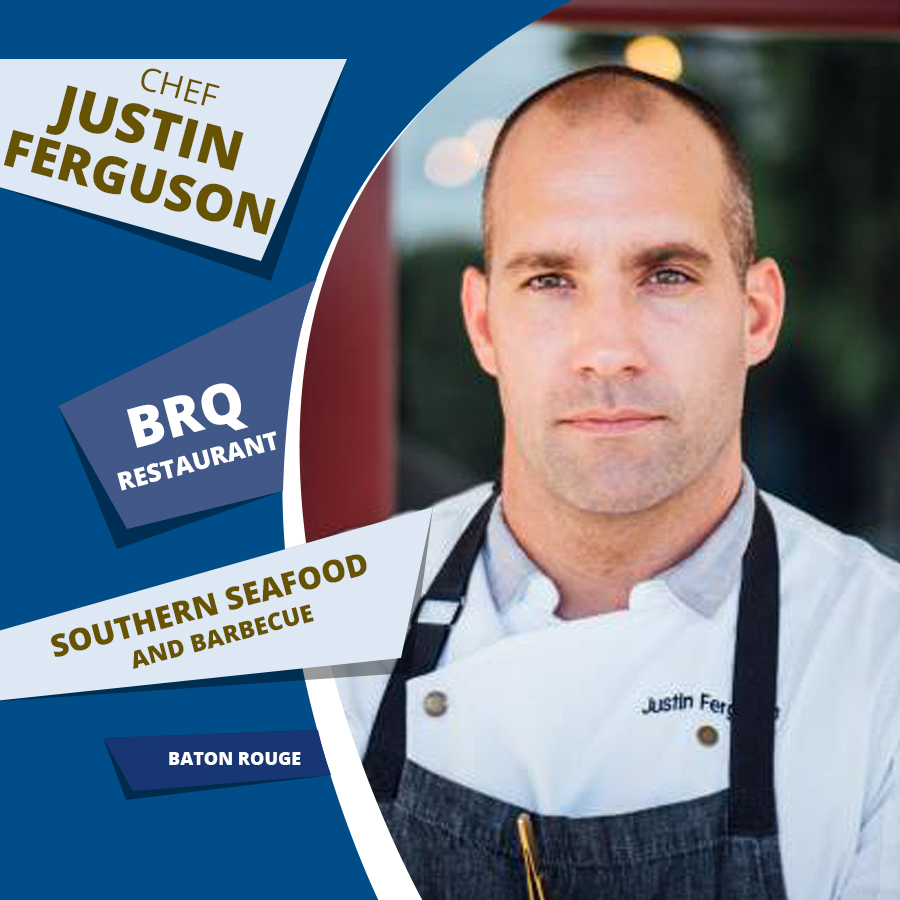 He has partnered with the owners of LCI and is the Chef/Owner of this concept. Justin and his team are set to open BRQ Seafood and Barbeque’s second location in Denham Springs this month.

Additionally, Ferguson is bringing his culinary talents to the world of catering with the launch Bacon & Fig Events, a BRQ/LCI partnership focused on producing the highest quality, fine dining events possible.