Bring water to a boil in a medium saucepan. Add oysters and cook for 3 minutes. Remove oysters with a slotted spoon and reserve 3 cups of liquid. Set both aside. In a Dutch oven over medium heat, cook celery, green onions and onions in 1 tablespoon butter, stirring constantly until tender. Stir in 2½ cups reserved liquid, garlic, thyme, red pepper and bay leaf; bring to a boil. Stir in heavy cream, reduce heat and simmer for 5 minutes. Stir in milk and return to a simmer.

​Melt 1/4 cup butter in a small saucepan over low heat. Add flour, stirring until smooth. Cook 1 minute, stirring constantly, about 3 minutes or until smooth (mixture should be very thick). 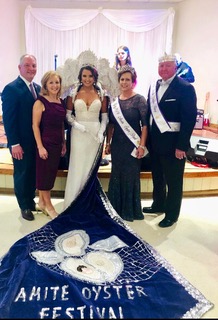 The Amite Oyster Festival is a one-of-a-kind festival. In the spring of every year this family fun fest attracts visitors from all over the country. Great music, great fun, and of course great oysters are waiting to be enjoyed in Amite, Louisiana. A full weekend festival includes music from Cajun, country, rock and roll, and reggae artists.

The Oyster Industry came into existence in Amite in 1949 when Carlo Venterella and Tony Relan began operation of Carlo’s Oyster House with a capital investment of $600, employing 10 people to open oysters in a building on South First Street known as the Old Blue Bonnet Creamery Building.

Until Hurricane Katrina and the BP Oil Spill (both of which severely affected the Oyster Industry), oysters were shipped from Amite to as far away as Oregon by air freight and trucked to points in Louisiana, Mississippi and Texas.

At one time, each plant employed a boat crew, a plant crew, and a delivery crew which consisted of approximately 300 people; and during the height of oyster season the costs could run as high as $30,000 per week in salaries alone.

This, along with maintaining buildings, buying and maintaining trucks and equipment, made the oyster industry a very important factor in the economy of Amite and also meant a great deal in other areas because those men also owned the boats that gathered the oysters.

A far-sighted man, Weldon Russell, realizing the importance of the Oyster Industry conceived the idea of an Oyster Festival for Amite, which started as the Amite Oyster Day, a one-day event that has grown tremendously over the years. The first Amite Oyster Day was held on March 20, 1976 at the Tangipahoa Parish Fair Grounds.

From that first Amite Oyster Day forward the festival has been planned and organized by the local Amite civic clubs. The festival itself is made up of three days of fun events with live entertainment, carnival rides and oysters of all varieties. There are weekend events leading up to the festival such as a scavenger hunt, formal gala as well as a parade, chili cook-off and oyster eating contest during the festival.

In the planning year of 2012, the Oyster Board made the decision to move the 2013 festival to downtown Amite. With the help of Mayor Reggie Goldsby and Mayor Buddy Bel the move proved to be a success.

This year, Governor John Bel Edwards sister, Alice Stevens is the reigning Oyster Festival Pearl and her husband, Alvin Stevens is the Oyster King. Exactly 10 years ago, 2009, the Governor’s Papa and Mama, Frank and Dora Jean Edwards were the King and Pearl. Our First Lady of Louisiana, Donna Edwards has served as chair of the Oyster Gala for many years.

The entire community feels a pride in taking part in the activities that made up Amite’s tribute to the Oyster. Amite Oyster Festival and the many activities.

Ladies of Louisiana – Schools (Jan. 2019) Evenings at the Mansion