As we age and mature, there are so many turns and paths to take. Career, marriage, children, and varying levels of activity that come with life and its experiences. Have you found yourself in a rut of complacency, or energized and motivated to get to the gym or running trail a few days a week? Are you living to eat or eating and fueling to live? Ask yourself this and think of a goal; what do you WISH you were doing? The first step is visualization, and the next is to take ACTION.

What did you do for activity at 13, 16, or 18 yrs old? Were you involved in school sport, did you play basketball in your front yard, did you run sprint races at recess, or swim races at the pool during your summers? It is time to tap back into THAT, whatever it was that moved you to push your body until you were sweaty, red faced and laughing. Embrace your inner athlete—she has been there this whole time. Even if you never competed in anything, you have two legs like anyone else and can start somewhere. For me it was the “Couch-to-5K” app in 2010, when at age 38 I had never run a mile in my life, ever. I swam competitively through most of my youth, so had never done many ‘land sports’. It was a mind-shift that needed to happen, as it does for us all when we try something new. The decision comes first, then the determination to take action and practice positive self-talk. 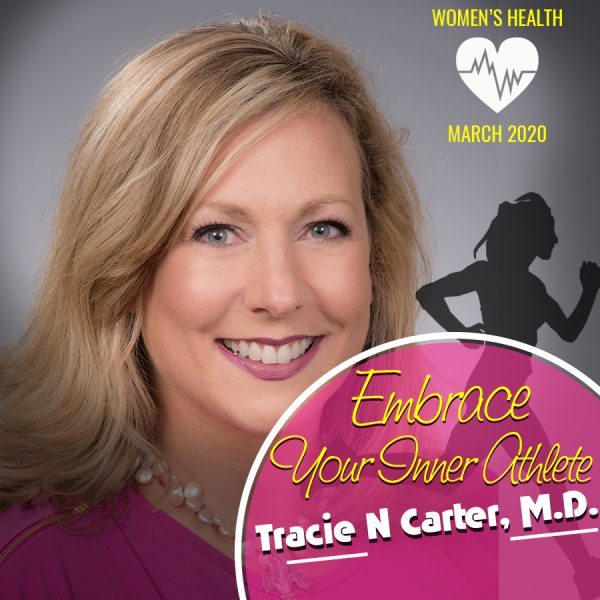 How you speak to yourself with your inside voice is a choice.

How you speak to yourself with your inside voice is a choice. Awareness of the negative thoughts and judgements we impose on ourselves is a huge step in overcoming negative thought habits. If you want to believe you can make a change, you sometimes have to ‘fake it until you make it’: say positive affirmations to yourself as you take new action. Your practice of awareness,followed by a reversal of the negative self-talk will eventually become a positive new habit. Then your new actions become part of a new routine.

Your inner athlete is the one who ‘suits up and shows up’, ready to take on a challenging workout, and ready to push a little harder even when you feel like quitting. Start simple: a walk around the block with your kids or dog, a simple bike ride on the local bike trace, or taking a masters swim class. It can be 3 beginner CrossFit classes or 3 beginner yoga classes. Just 3 workouts a week for 3 weeks in a row WILL make an impact, and it starts with YOU. What kind of athlete will you be this year? I wish you the best at making a start and embracing your power as you recognize the athlete within.

Dr. Carter has been a life-long resident of Slidell, LA, and earned her medical degree from Louisiana State University School of Medicine in New Orleans. She completed her residency at Louisiana State University Health Science Center in the Department of Pediatrics. She worked at Pearl Acres Pediatrics six years before joining Ochsner in 2007. Additionally, she has served as the Chief of Pediatrics at the NorthShore Regional Medical Center (NSRMC) from 2002-2004; Chief of Pediatrics at Ochsner Medical Center 2012-2013; and was the Ochsner Medical Center Reach Out and Read Physician Liaison from 2012-2013. She has gone on mission to Belize with the Dos Amigos dental and medical mission in 2010. Her interests are triathlon and fitness activities, and passionately promotes an active lifestyle with healthy nutrition in children and adolescents. She has deep compassion, supporting families of children on the Autistic Spectrum Disorder, and asthma management. Her goal is to have parents and caregivers understand good health practices, and take an active role in the health and vitality of their child.