Abbigale Rose Ferrier was born on June 11, 1998 in New Orleans, Louisiana. She attended Holy Name of Jesus Elementary School until 2007. Shortly after Hurricane Katrina, Abbi’s family relocated to Marietta, Georgia, where she completed the remainder of her education. In 2016, Abbi returned to Louisiana to attend Louisiana State University in Baton Rouge. During her time at LSU, Abbi joined the Air Force ROTC program, where she accepted an AFROTC scholarship and took an oath of enlistment to enter the Air Force upon graduation. In the summer of 2018, she attended Air Force Field Training at Maxwell Air Force Base and earned a spot to commission as an Air Force Officer.

Abbi has been the recipient of many awards through Air Force ROTC, both academic and achievement. In 2018, she was selected as Cadet Wing Commander for her Air Force ROTC detachment, where she led over sixty GMC and POC cadets. Abbi has been ranked amongst the top 5% of her detachment, earning the Meritorious Service Award twice. She has also been nominated to earn the Distinguished Graduate award amongst her senior class. Amongst other extracurricular achievements, Abbi has consistently earned a spot on her university’s dean’s list and was selected to intern for Birmingham, Alabama’s sixth district congressional office.

Abbi will graduate from Samford University on May 9, 2020 with a Bachelor of Arts degree in Political Science. Upon graduating in May, Abbi will also commission as an officer into the United States Air Force. Abbi has been selected by the Air Force Judge Advocate General Corps to delay her entrance into Active Duty to pursue a law degree. In the fall of 2020, Abbi will be attending Loyola University New Orleans College of Law to obtain her Juris Doctor. Upon the obtainment of her Juris Doctor degree, Abbi will enter into the United States Air Force as a Judge Advocate General (JAG) Officer. 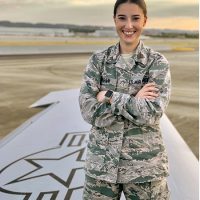 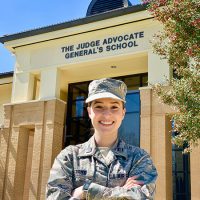