While Ms. Tucker has been thriving in the male dominated profession of Civil Engineering and Infrastructure, this was not her first foray into a profession that does not see many females in staff nor leadership roles.  Prior to taking over her family’s business, she was a Baton Rouge City Police Officer.  Police work was a passion of hers as a Criminal Justice major at Southern University in Baton Rouge, and she considered it an honor to work in public service.  She graduated as the President of the 72nd Basic Training Academy, and ultimately ended up working in the department’s 1st District station on Plank Road.  She was able to gain experience across several different specialized divisions including mounted patrol, bait car/car theft division, and brief experience on a federal + local narcotics task force case.

Working in these fields has driven Ms. Tucker to become more aware of the challenges that women and girls face in working in male dominated fields, and the importance of self-confidence & female empowerment.  Her experiences have contributed to her becoming an advocate in various causes that promote the realities, experiences, and growth of women and girls in all types of careers.  It has also helped to ignite a fire in her to be a community champion for disadvantaged businesses and the activities & initiatives that hope to level the playing field of opportunity in the fight for economic parity amongst all disadvantaged groups. She was recently appointed to the Governor’s Louisiana Small Business & Entrepreneurship Council and serves as Vice President of the council for 2019-2020.

As the daughter of parents who owned a federal contracting business, and whom were always engaged in causes that lifted and empowered the community, civic activism has long had a place in her heart.  Her father, Robert H. Tucker Jr., has long been a leading political operative in many political campaigns from New Orleans to Washington DC.  The apple does not fall far from the tree, as she has been active in many political campaigns & initiatives and has recently made her first venture into an attempt at elected office.  As recently as last month, she has thrown her hat in the race for the Democratic State Central Committee, and the Orleans Parish Democratic Executive Committee.  Her goal is to re-ignite the passion inside the democratic party amongst young voters and to help lift up the next generation of democratic office holders.

While all of these causes are noble in their own rites, her greatest pride is in growing a small business domiciled in her hometown of New Orleans.  She comments that “being able to seek and employ engineers and staff members of many diverse backgrounds and nationalities is a source of pride, and a positive contribution to a field that can often be very homogenous.  Our strengths as a city, as a state, and as a nation reside in our acceptance and encouragement of perspectives outside of our own.  I am proud to promote and shine a light on diversity, especially in fields where it has been lacking for too long.” 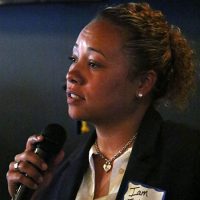 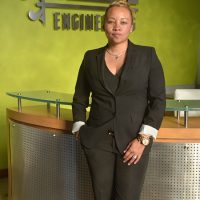